As health care costs continue to rise in the United States, patients are increasingly being stuck with a larger and larger portion of the bill. According to the Kaiser Family Foundation, the average deductible among covered workers with a deductible has gone up nearly $1,000 in just ten years: 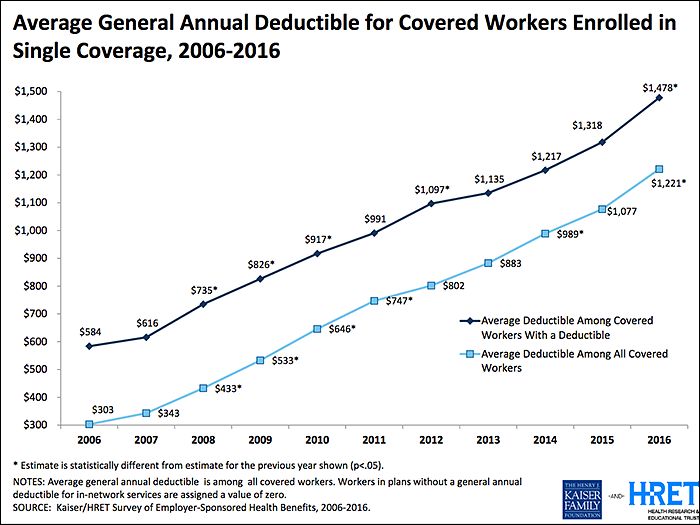 Writing in The Huffington Post, Dr. Sudip Bose points to several reasons for the increasing burden being placed on patients, including a phenomenon where emergency services are guaranteed to most patients, but reimbursement for those services is not.

In 1986, Congress passed the “Emergency Medical Treatment Active Labor Act” or EMTALA, and as a result, the greatest unfunded mandate in healthcare in American history was launched. EMTALA mandated that every person who presented him or herself to an emergency department was entitled to a “medical screening exam” (MSE) and stabilizing care for an emergency.

One common source of a “coverage gap” occurs when patients are treated in an emergency room and discover after the fact that their insurance does not cover their treatment.

Surprise coverage gaps occur when an ED patient reasonably believes that they are having an emergency, are treated by the ED and then discover after the fact that their health plan does not provide fair coverage for the services that were provided to them or their family member.

The President of the American College of Emergency Physicians pointed out that high deductible plans make people not realize how little their insurer is paying for their medical care.

Says Dr. Parker, president of ACEP, “Many people don’t realize how little coverage they have until they need medical care — and then they are shocked at how little their insurance pays. Others are not seeking emergency care when they need it — and getting sicker — out of fear their visits won’t be covered.”

As the president of ACEP, Dr. Parker, puts it: “Patients should not be punished financially for having emergencies or discouraged from seeking medical attention when they are sick or injured. No plan is affordable if it abandons you when you need it most.”